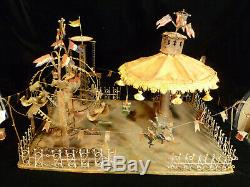 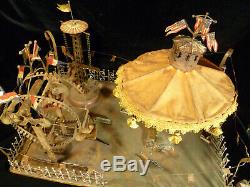 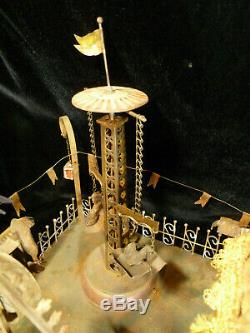 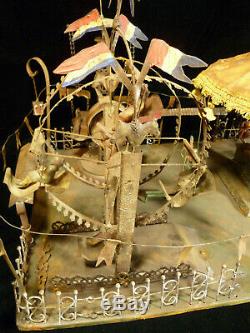 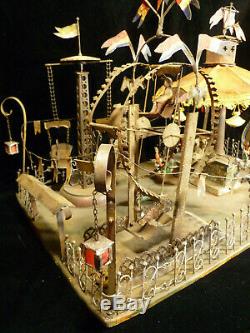 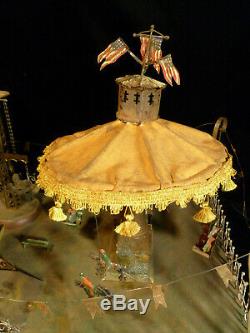 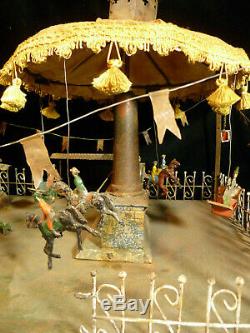 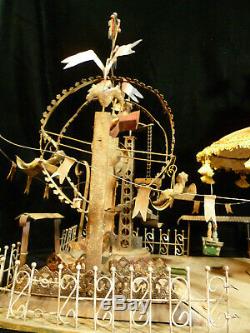 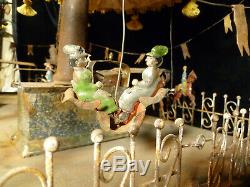 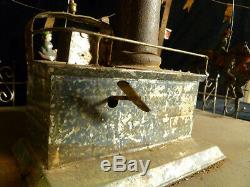 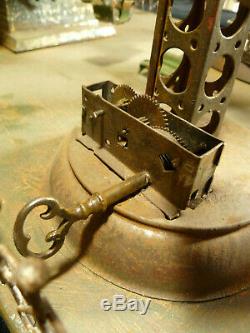 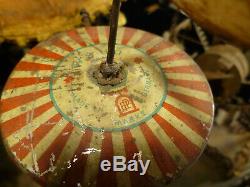 RARE ERNST PAUL LEHMANN GERMAN AMUSEMENT PARK CARNIVAL WIND-UP TOY CIRCA 1910. This wonderful, large toy measures approximately 24 ¼ long by 16 ¾ deep by 16 high. Ernst Paul Lehmann Toy Company was located in Brandenberg, Germany from the 1880s to 1930s. As you can see by the photos this wonderful, large wind-up toy has seen its share of rainy days. However, even with the aged patina it holds a magical allure that hearkens back to a much simpler and nostalgic time.

This will make a wonderful conversation piece in anyones home either on a shelf or on a display table. What I believe to be the original keys are still attached to the various wind-up mechanisms.

On top of one of the rides stands for Deutsches Reichsgebrauchsmuster. Is not a German patent.

It was instead a way for inventors to register a products design or function in all states within Germany. From 1891 to 1952, products manufactured in Germany might have been stamped with this D.

About the Ernst Paul Lehmann Toy Company. While the company was founded in the 19th century, it came into prosperity in the early 20th century when it switched to making lightweight yet intricate tin toys in popular themes at a time when most other toy manufacturers were still making only heavy iron toys. In addition to being lighter and easier to play with, they were able to be lithographed with detailed graphics and vivid colors not possible with iron toys and were more affordable too.

The company made tin toys in many different sets with both human figures and many different animals such as mules, ostriches, donkeys, and zebras. Most were whimsical and with some attention grabbing theme or capability- a monkey climbing a pole, a tap dancer tapping, a skier skiing, and tin cars with a horn that blows, a father who swipes his hand at his "Naughty Boy" in the front seat. In fact, all Lehmann tin toys have names with most embossed on the actual toy; names were both descriptive and fun such as the "The Boxer", "Balky Mule", "Tut Tut", or "Paak-Pak" (a duck pulling a bucket of water with her 3 ducklings swimming around when wound). Most Lehmann toys are marked, either with a logo or with the name embossed on the piece. Like any old tin toy, price is highly correlated to condition and having the original box although any early Lehmann tin toy will bring strong prices.

The Lehmann Company is still in business today, but their peak years of production and the most highly collectible period is from about 1905 through the early 1950s. While they remained in business post 1948, the company was occupied by the Russians after World War II and models made after this time typically do not have the same quality or collector interest. The item "RARE ERNST PAUL LEHMANN GERMAN AMUSEMENT PARK CARNIVAL WIND-UP TOY CIRCA 1910" is in sale since Wednesday, September 25, 2019. This item is in the category "Toys & Hobbies\Vintage & Antique Toys\Wind-up Toys". The seller is "davidgrant777" and is located in Lake Oswego, Oregon.